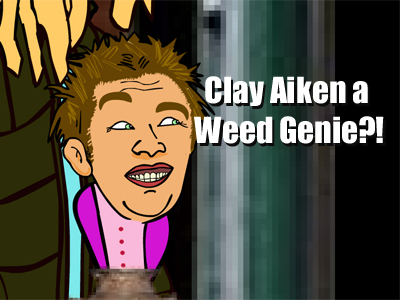 Before I continue, I wanted to address the Clay thing. For those that don’t know, I released a brand new Chilltown episode, Clay Aiken, Weed Genie?!? and I’m really excited about it! Been getting great feedback. If you haven’t seen it, you can watch it here.

But there’s a little side story. Before I launched, I put together a few teasers and one of them was a clip from the Clay Aiken, Weed Genie show that ran about 4 seconds. I put it up on Reddit and next thing I knew, a bunch of “Claymates” were pissed. One of them claimed Clay didn’t “talk that way” and another claimed he didn’t “look like that.” I wrote back, saying, uh, this is supposed to be a parody, but they, apparently, were gravely disturbed. I actually didn’t even think I reamed him too hard. Yeah, his voice is over the top, but…IT’S A COMEDY!

I was a bit upset about it. Chilltown is my baby and I was scared of, essentially, the Attack of The Claymates. Or criticism. Or both. A few friends said, “Are you NUTS!? This is the best thing that could have happened. You can only HOPE they’ll be pissed. The controversy will make more people watch.”

Well, I didn’t write it for that reason. I wrote it cause I thought Clay was a corny singer and an annoying celebrity just trying to milk his 15 minutes.

But I thought about it and it made me realize two things: 1) As an artist, I have to put out what I want (as long as I’m indie) and people are gonna like it or not. I have to just worry about doing stuff that appeals to me and hopefully other people will enjoy it. And 2) Uh, I am going to promote the full episode on some Clay fanpages. And yes, I’m expecting a Claymate fatwa.

So, onto part two of How I Got Started Writing.

After I got the books, I put together a short script. Brought it back to MTV and they weren’t interested.  And while I was disappointed, it somehow gave me more resolve. I sent it to a friend of a friend who worked at the William Morris Agency. He loved it and forwarded it to someone in their TV department. They loved it as well (!!) and set up a meeting. By this time, I realized: ok, I want to be a television writer. I grew up watching tv constantly. Not only am I a classic nerd, but my dad was a copy editor at a paper, worked a late shift and my mom waited to eat with him, usually around midnight. An only child, my dinner companions were either Mad Magazine or syndicated reruns of ancient TV comedies, which happened to be on the air around 7pm, like I Love Lucy. I loved TV.

I arrived at William Morris. Their NYC office is enormous and thrilling and intimidating all rolled in one. They offered me coffee, water, xanax (ok, maybe not xanax, but I probably needed it.) Took me into this big conference room and immediately wanted to put one of their dance music clients on as music supervisor. Someone whose music, coincidentally, I despised. Yes, despised. Aside from that, it wasn’t appropriate for the show I was doing, which was hip-hop oriented. I realized right off the bat that it was some type of packaging deal and they wanted to put someone they associated with “urban music” on. Sigh.

They said they would put it in with a bunch of other scripts and submit to a few places. Ah, the power of being absolutely irrelevant. Needless to say, nothing happened. But I was hooked. And just kept writing and writing and writing. And ultimately, something stuck.

NOTE FROM LB: FWIW, my first agent was a wonderful woman named Sylvia Hirsch at William Morris. They wanted to package me with a singer as well. One of the “Bobby”s who was popular at the time. (Late ’60s.) I hated his music too. It didn’t work out, but Sylvia definitely got me started.

I'm primarily a writer. Sold a few series to tv networks and production companies but never had anything get on the air. So I taught myself how to animate and completed 3 digital series, launching two. The first, Chilltown has been named one of "Five Web Series That Should Be on Your Radar" by ABCNews/Univision and a "Show to Watch" by Tubefilter. The second, Lele's Ratchet Advice Show, garnered a fanatic cult following. As a result, I now do Lele's 60 Second Wrap Up, a weekly comedic entertainment report (which I write & perform) that airs on urban radio stations Rhythm 105.9fm and the Just Wake Up Morning Show on WWRNfm. View all posts by ChilltownTV

One thought on “Leesa Dean: Adventures of a Web Series Newbie – Chapter 15”

OUR MOST POPULAR NEW PAGE!

OUR MOST POPULAR "OLD" PAGE!

The Secret Behind Building a Strong Story Foundation

Career Insights from around the Web Updated Daily

STAY IN TOUCH WITH TVWRITER™

All Our Posts (OMG!)