If you want to get ahead, you have to speak the language. Impress your friends, relatives, rivals, and potential co-workers via this fascinating guide:

A few weeks ago, Simpsons executive producer Matt Selman tweeted a list of the show’s writers room terminology, explaining how he and his colleagues use terms like “wacky stack” to describe “too much silliness at once”: 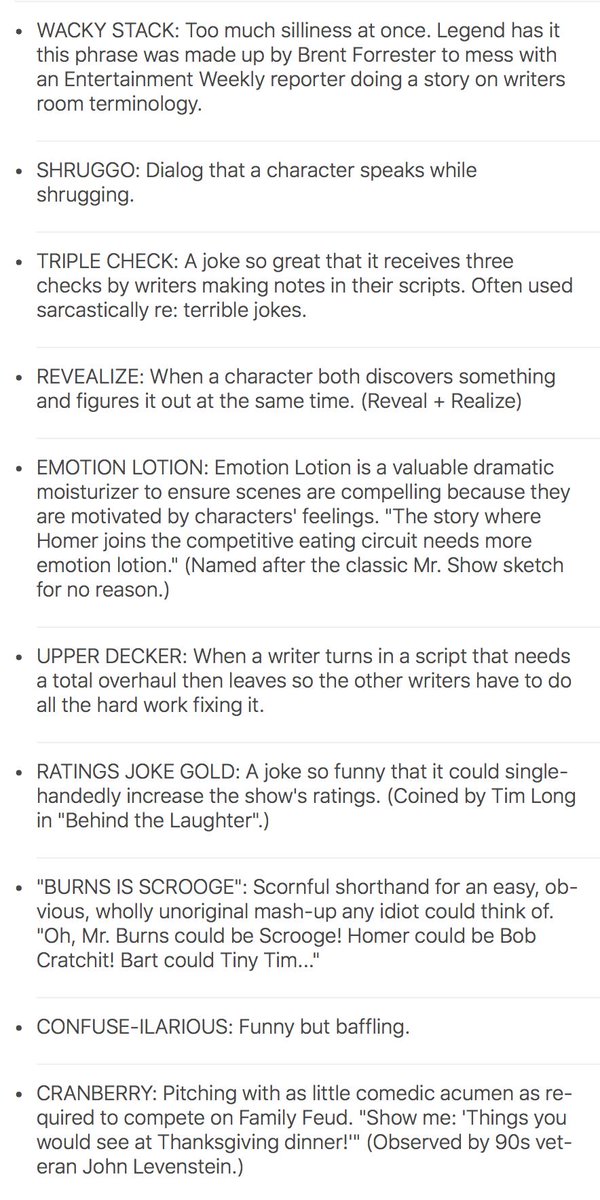 Our curiosity piqued, Vulture reached out to the writers of Black-ish, Brooklyn Nine-Nine, Bob’s Burgers, Big Mouth, Superstore, and A.P. Bio to see if they had any similar insider lingo and running jokes that help them get through story pitches and rewrites. They were kind enough to run through many of the terms that are bandied about in their offices, many of which come from other shows, overlap between writers rooms with different meanings, or have vague origins that are lost to time.

As a very meta example, current A.P. Bio writer and former Simpsons stafferDonick Cary shared “The Simpsons Did It.” “It’s what a lazy writer says when they don’t like a joke,” he explains. “We’ll get into a debate about what joke does or doesn’t go in, and that’s kind of the argument ender, that it was already done somewhere else. For 20 years, I’ve heard ‘The Simpsons did it,’ and I’m often like, ‘I was in the room when The Simpsons did that. It’s totally different.’ And then I still get argued down.”

Read on for many more examples of terms like this and behind-the-scenes stories from these producers and writers, such as what a “Summer Frankenstein” script is, why they try to avoid “refrigerator logic,” and why one writer threatened to stab her co-workers….

Read it all at Vulture.Com

STAY IN TOUCH WITH TVWRITER™

All Our Posts (OMG!)